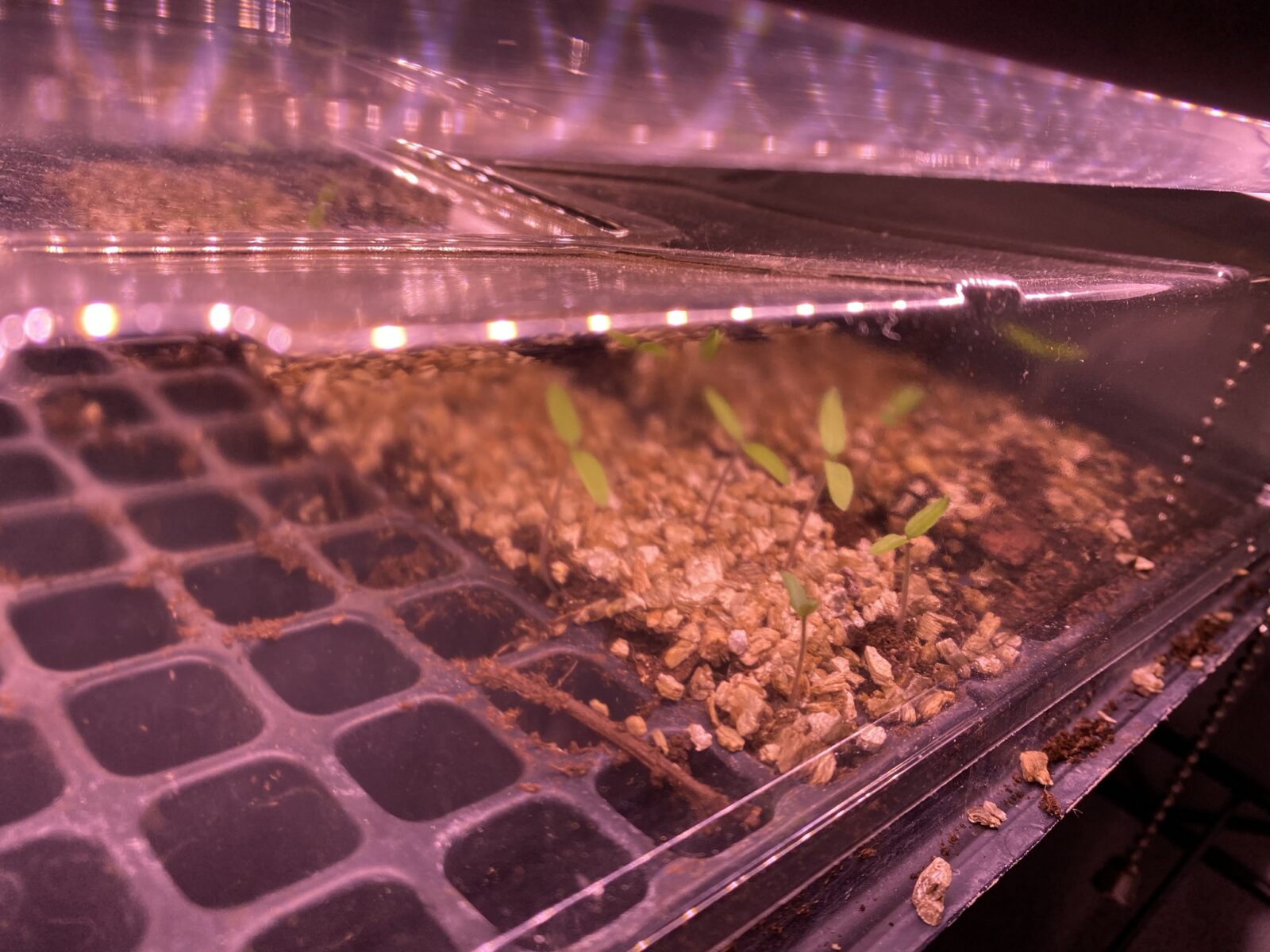 This post is the first in a series of what I did in 2021 to become more self-sufficient. Thanks so much for being here!

I learned the basics of seed starting in my Permaculture Design Certification class. Overall you will hear me refer to this course as my jumping off point for this self-sufficient journey. I also learned more off the internet, YouTube is such a resource these days. Lastly, I took a class from Urban Farm School called Seed-Starting Success. The owner/founder Carmen Lamoureux was one of my Permaculture instructors and I really learned a lot from her so I took this more advanced online class. Worth the class cost just for the handouts!

I had gardened before, I had raised beds at my last house, 4×8′ and three of them. I enjoyed growing tomatoes, cucumbers, zucchini and lettuce. I didn’t grow much else and was ready to expand my horizons. I made a plan and was gifted the Farmer’s Almanac Gardening book for Christmas which turned me on to biodynamic gardening. Maybe I’ll talk about that in another post, it’s got a set of planting dates/time to overlay this whole process.

I knew where I was going to set up my growing area in the basement, had a good idea of what I was doing and just started. That’s pretty much the lesson here. Think about it, plan for a bit, then take action. You don’t learn unless you try.

I ordered seeds online, a first for me, and planned my garden space on paper in February. I ordered many seeds for the first time from Johnny’s Seeds because they were either organic or open pollinated (which means they aren’t hybird or genetically modified). They had dates/times to order because of the pandemic and supply issues. I’m not sure if they’ll do that again this year.

I also made some spreadsheets of when to start the seeds as it relates to when I want to transplant them outside. My seed starting class helped with that as they provided some handouts for this. I selected a place in my basement and purchased an adjustable metal rack (6′ tall, 4′ wide and 18″ deep). I set it up with my grow lights in each tier. It’s important for the light to be close to the seed so it doesn’t grow towards the light and get long/stringy stem.

I prepped my trays, planted my seeds and had most things started by mid-march. Tomatoes, cherry and other, peppers, lunchbox, giant and hot, lettuces, swiss chard, and more. Don’t forget to set a schedule for watering. 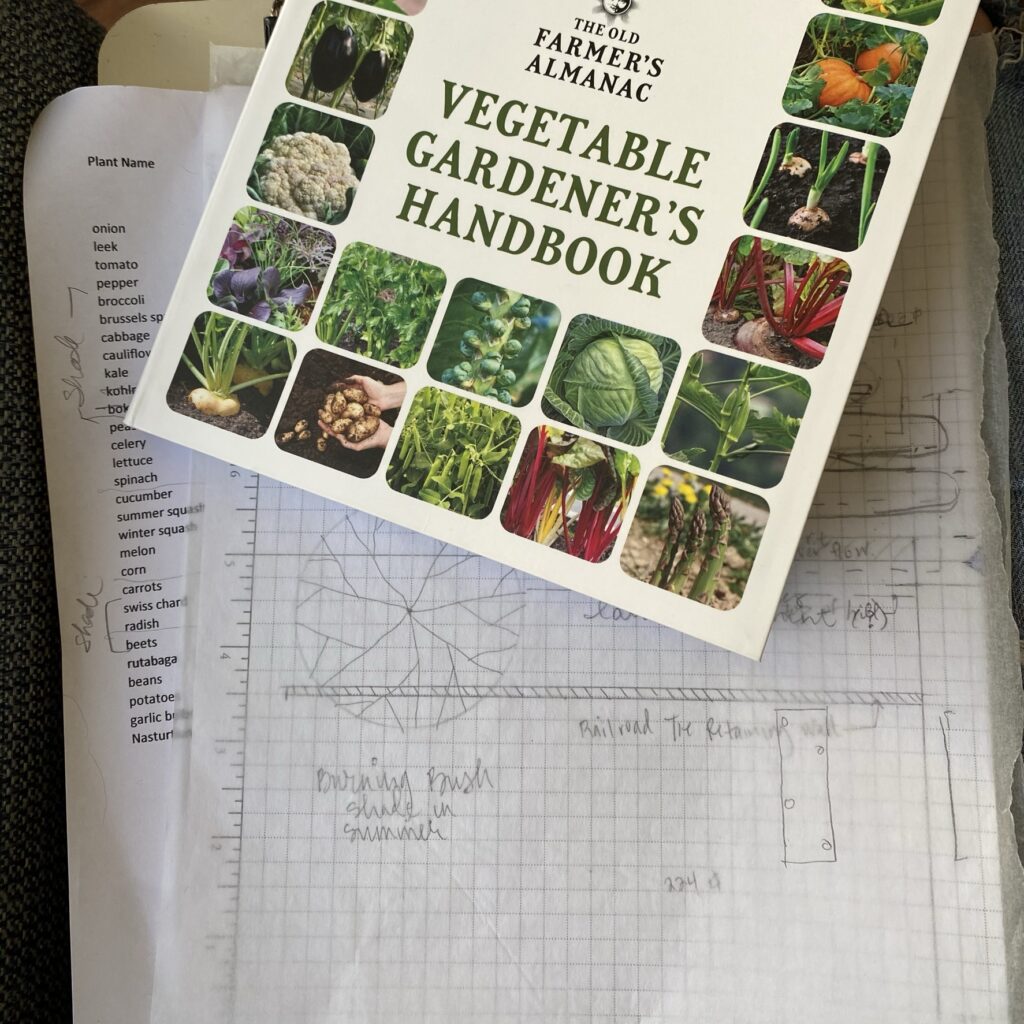 How Much it Cost Me

My total seed order was about $80. I had some left over seeds from last year so I also used those, and didn’t count the cost. I bought Organic ProMix ($20 on Amazon) and then a bale of ProMix from the plant farm near me for $40 (it’s a cubic yard, compressed).

I got some plug trays (tiny seed starting squares) for free from my seasonal job at the plant farm- more on that in another post. I also ended up purchasing silicon seed starting trays from an Instagram gardener I follow, Epic Gardening, they can be found here. Those were about $140 but I plan to reuse them forever. They are much better sized than the little ones I got from the plant farm.

My light set-up was from Menards, I liked their full-spectrum lights and didn’t notice a huge jump in my electric bill. I can’t locate them online but they were 4′ long and about $30 each. I ended up with 8 over the past year, just adding to them every time I went. I also bought a metal rack with adjustable shelves for the majority of the starts ($75), and expanded to a table in my basement when they got too big.

I need to plan and prep my outdoor beds exactly for what I start seeds for. It was the proverbial my eyes are bigger than my stomach scenario. I am sure I’m not the only one with that dilemma, I loved picking out seeds and really wanted to plant all these amazing veggies, but due to space and not preparing my soil outside well enough, I lost a bunch.

I would start sooner and have a hoop house or greenhouse to grow the starts in for the cooler “shoulder” season until I can transplant outdoors. This cuts down on basement space and grow light requirements. I was envious of Instagram growers who already had lettuce to eat in March.

I planted too many cherry tomatoes. In the end, my chickens really loved to eat them but other than that… they took up a lot of prime real estate and were pretty to look at but I don’t eat that many cherry tomatoes. Maybe if I had a farm market (2022 goals) that would be ok. But either way, having too much of one thing can cause chaos in the system.

I set up an irrigation system and it got clogged early on and didn’t work. I ended up NOT getting into a good watering schedule because of this and didn’t have the bountiful harvest I should have had. Cucumbers were nonexistent, squash was scarce and all in all the end result was disappointing given how much prep work I had done starting all the seeds.