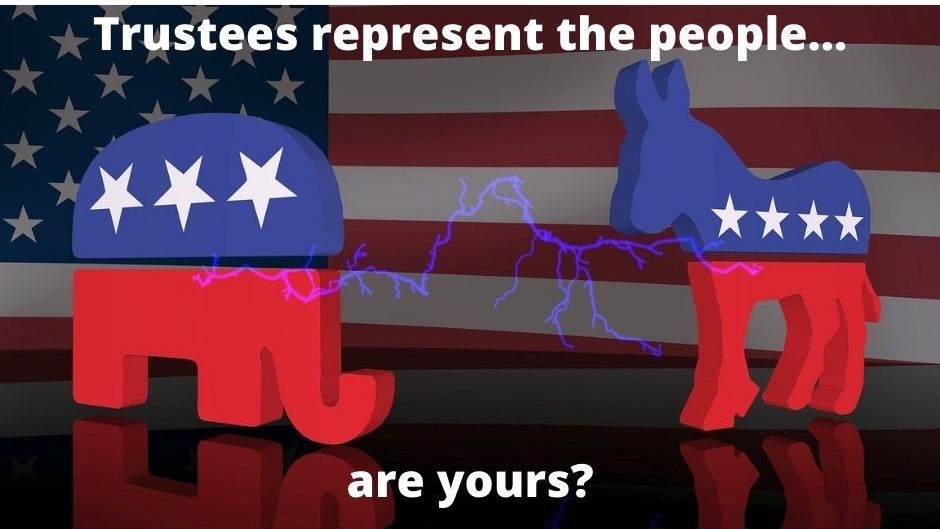 In this article I am exploring two concepts 1) Township Trustee is a Nonpartisan Seat and 2) Your Trustees should represent the people.

The second most common question I received in my 2021 campaign (first being why I’m running) was what my party affiliation was. When people ask, I would inform them that the trustees represent the people and not a party. Issues of taxes, development and community are nonpartisan. This is why party affiliation is not on the ballot. If you are only voting with your party affiliation, I have a message for you. The problems in our township (and our world, for that matter) will not be solved by division and separatism. I am a person and I am here to listen to the residents and act on their behalf. Which brings me to my next point… representation.

When Hawke came into office in 2012 is when our town hall meetings went away. There is no way to ask questions or submit feedback without standing up at a Trustee meeting, which I might add is very intimidating for most people. We should not have our trustees on judge stands, much less have a conversation with the trustees unless requesting one personally. The meeting agendas are cryptic and the executive sessions are not open to the public despite the Sunshine Laws. The trustees are making deals and bringing projects into the township that many people wonder who wanted the projects? The pickleball courts and new soccer tournament park at Kirk Schuring park (formerly Tam O’Shanter) are perfect examples. Many residents I talk to ask who’s ideas these were because residents didn’t suggest them, or made aware of public meetings asking for feedback. An example of the cryptic meeting agenda for the Oct. 23, 2021 meeting:

Do you want to know what this “Resolution Accepting the Amounts and Rates Determined by the Budget Commission” was? I only figured it out because I was sitting in the meeting and after three “I’s” approving it, someone made a comment about the $2 Billion dollar valuation of our township properties. And then Randy Gonzalez made the comment about how the property values* will be great for people when they sell their homes. This was our trustees approving the Stark County Auditor’s valuations of our township properties, the amounts that determine our property taxes! I had no idea they got to “approve” or accept the Auditor’s determination of our properties. Again, with the lack of transparency and cryptic meeting agendas. *I created a blog post early on about how our property valuations are in a “bubble” right now because of the housing market. These are UNrealized capitol gains until a house is sold and those capitol gains are “realized.” I wrote another article on my blog about this, please note the Auditor’s office has not responded to me again (after my initial inquiry).

I was running for Jackson Township trustee in 2021 (an plan to again in 2023) because I want fair, open communication and transparency from our trustees. Our trustees should be here to speak for the people, and be of the people. There are rumors, and have been for years, of shady behavior from our incumbents and fiscal officer and it saddens me to know this is an issue in our local government. Even the suspicion of shady activity is unfortunate and has no place in our township.